Let me start out with a mindblower: The Codek Spiral, reviewed herein, is currently available starting at $125. That’s over $450 off retail (with the code "TIMEBUM", which was made just for you, dear reader). Look at the picture below. See that funky case that you’ve never seen before, that dial design you’ve never seen before? That can be yours for a measly $125. The crown? It sets an ETA 2824-2, modified to eliminate the date position. To review: Unique design. Vaunted Swiss movement. $125. 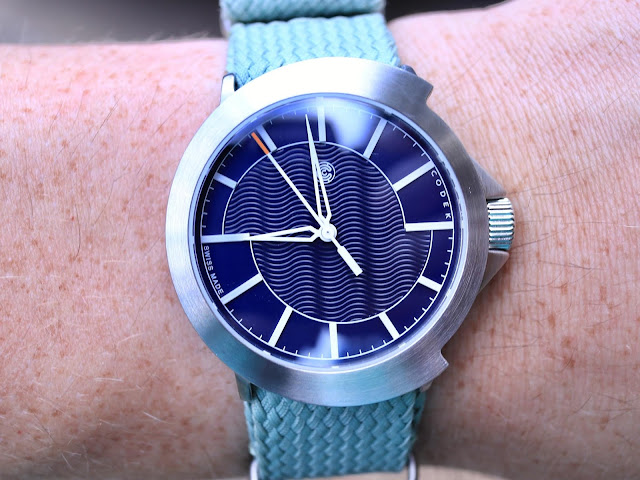 The Codek Spiral is an entirely original offering. The complete design, as you see it is meant to represent the hairspring and balance of a mechanical movement (feel free to google an image or visit the site for a very helpful description of said resemblance. I didn’t know that until I sat down to write, and I certainly had an “Oh yeah!” moment. The case on this is 316L stainless steel (of course) and 38mm, and only 10.6mm thick. While I think the dimensions and included leather straps suggest a dress watch, the design has a more avant-garde feel that while potentially dressy (further suggested by the 30m water resistance), is undeniably casual at its core. The watch sits well on the wrist and catches the eye quite easily due to its unique shape. Most often, when I glanced down, it reminded me most of a horseshoe crab with its tail cut off. Also, of an airborne bot with a socket-mounted thruster (the crown). But that’s just where my mind goes. Because I’m weird. I do enjoy the very thin, hooded 20mm lugs (drilled), which cover the ends of the strap. I imagine a vintage straight-end bracelet may not look terrible on this watch, in fact. The caseback is see-thru, presumably because it’s a Swiss movement and you’ll want to undress it with your eyes. Overall, the case is the star here, and while I do wish it had some contrasting finish, that lack doesn’t detract from its uniqueness. 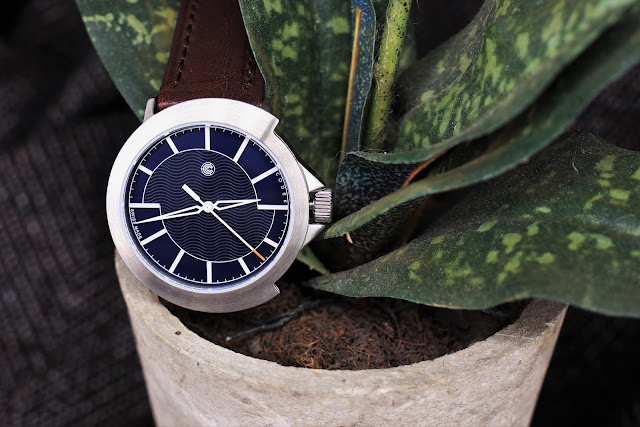 ​
Moving right on along to the dial, something left me a bit unsatisfied at first. I think I wanted there to be a touch more depth to everything, perhaps raise up the applied indices. That said, like the case, this is an entirely original dial design, and I do like the offset dial halves, which represent the expanding and contracting hairspring of a watch. The wave pattern on the central dial is enticing and fittingly evokes the amplitude of the movement's regulating organ. The logo above the center is not distracting, which is a real risk in a dial this unique, as too much text or logo can ruin the balance. The hands are skeleton style, and the second hand features a saucy orange tip. There’s a lot of great texture and variation in this dial, but what disappointed me was the utter lack of lume. What an exciting layout this would have been to see all lit up by some C3! A huge missed opportunity. If we accept that the watch presents itself as a dress watch despite its casual design, then the lack of lume makes sense. But the design belies its self-proclamation of dressiness, and so we are left with a not-that-dressy watch without any lume. And thus I am timeless in the dark! 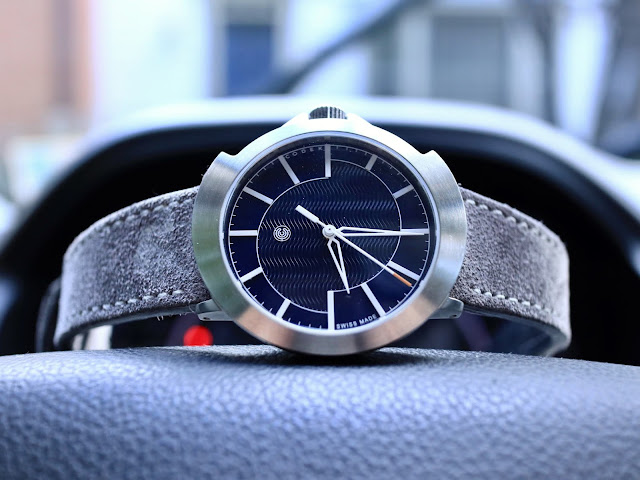 ​
I refuse to write anything about the ETA 2824-2 movement other than you should know about it by now. As I mentioned in the lead, the spiral has no date feature, and the set lever has been blissfully modified to remove the date position on the crown--which is engraved with the logo, protected by crown guards, and a snap to use. Let us all give a hearty round of applause to the thoughtful souls at Codek! 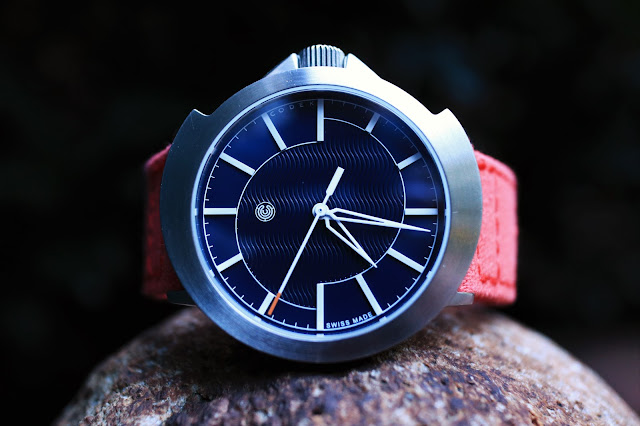 ​
The straps that were included with my sample were lack and brown vegetable-tanned calf leather with sturdy quick-release spring bars. They were thicker than I would have preferred for a watch like this (it issupposed to be dressy, after all), but appeared to be of high quality. Further, there is a loop on the underside that keeps the floating keeper from floating too far and off the long end of the strap when buckled. I’ve not seen this before (that I can recall) and was just plum tickled. A shell cordovan strap is also offered for $10 (a whopping $135, if you're keeping track). Strap swaps were a cinch, though finding a solid strap to pair with it wasn’t as easy as I would’ve liked. Browns and blacks are fine, not exceptional. I did find a good pairing in my orange canvas from Barton Bands. It pulled out the orange tip of the second hand, and goes to further my assertion that the watch itself is more casual than dress. 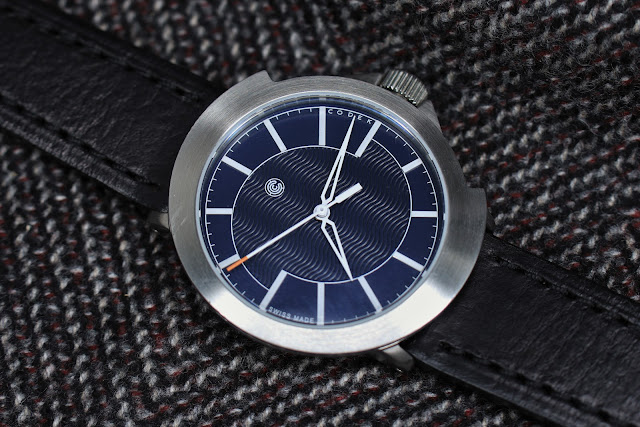 ​
What are we left with? At $125, I can’t complain much about the Codek Spiral. At the retail of $595, I’d suggest the lack of lume, less-refined finishing, and insistence on treating itself like a dress watch were all issues. The counterpoint is that qualifying as a dress watch is not about aesthetics. Perhaps it's about proportion (thin), date (none), lume (none), and seconds hand (none). In that case, three out of four ain’t bad. But, also, it really doesn’t matter: this is an undeniably fun watch, and while it won’t be for everyone…it kind of is, because it’s $125 and why not?⬩ 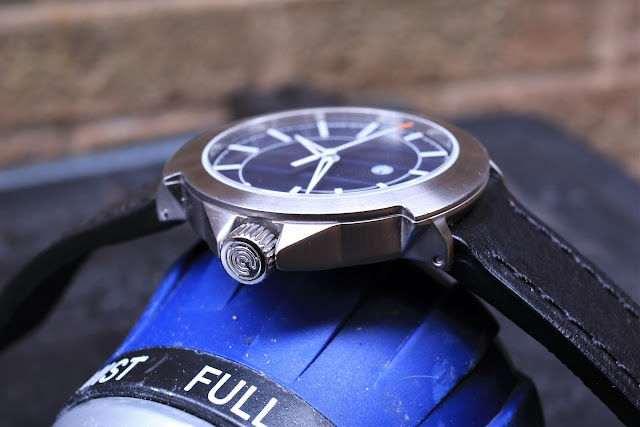 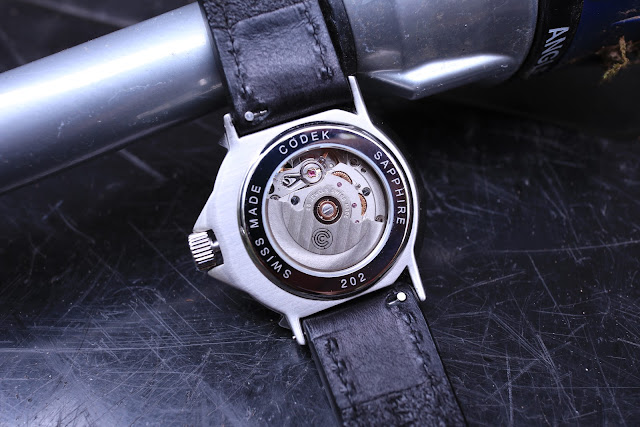 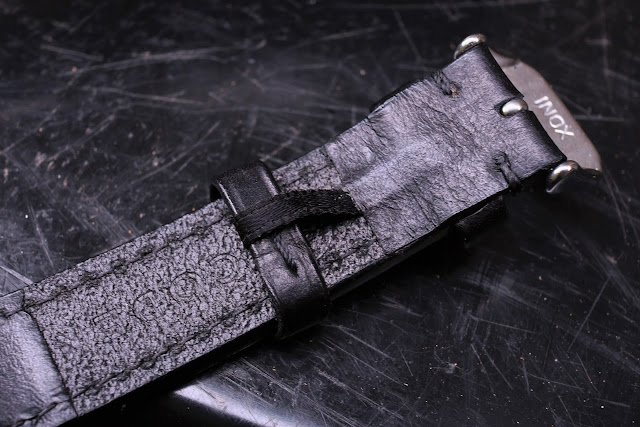