I like the Bangalore Watch Company’s Mach 1A. We’ll start there, so you can skip the rest if you want (please don't). I liked it when I took it out of it box, when I put it on my wrist, and when I saw it in my watch box. It’s a good watch and hopefully you’ll understand why, soon. But first, a bit of background. 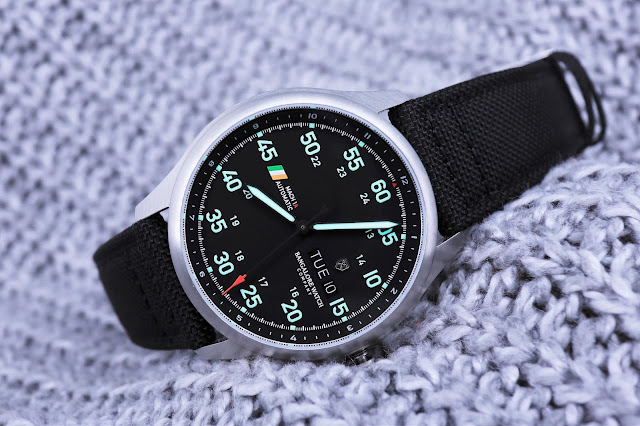 ​
Bangalore Watch Company (hereafter referred to as BWC, because typing is hard), was founded by husband-wife duo Nirupesh Joshi and Mercy Amalraj. The two left successful tech careers behind after falling in love with watches, and returned to their native India to start the brand in 2017. They settled in Bangalore—India’s tech-hub and former home of HMT Watches, perhaps the country’s best-known brand. But BWC has aims to change that. Their first release was a classically designed dress watch, the Renaissance, and they’ve followed that up with the MACH 1 pilot watch, which celebrates the Indian Air Force’s first supersonic jet, the MiG 21 Type 77. The MiG served the IAF for 50 years from 1963-2013, and the watch does a beautiful job of commemorating its legacy. 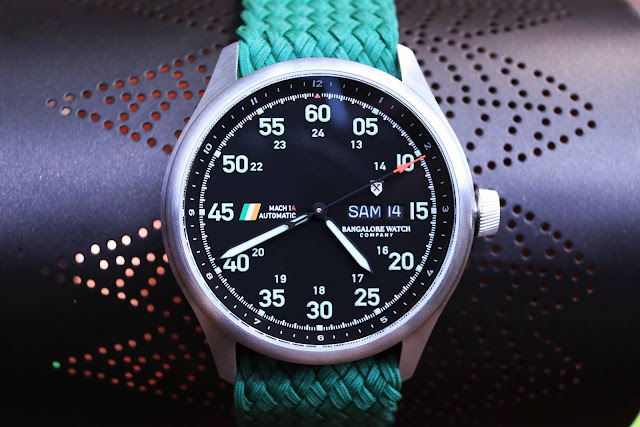 ​
Let me start with the dial. The Mach 1 comes in either a “civilian” or “aviator” layout; reviewed herein is the aviator. The difference lies in where the numbers are. On the aviator, the primary dial numbers are in 5-minute increments with ’60; at the top, while your typical 12-hour markers are on the chapter ring. The Civilian model (Mach 1C) has this reversed. What else about the dial? It’s a well-balanced matte black with matched day and date display that flip over instantaneously at midnight. The numerals are thick Super-LumiNova C3 that suck light in and spit it back out twice as bright, for a fantastic lume experience. That goes for the hands as well, which are pencil style, with an orange-tipped seconds hand that, to me, evokes a jet fighter. The dial makes this watch unmistakably a pilot’s watch, including the obligatory red triangle on the chapter ring at 12 o’clock. Dial text is well balanced, with branding under the day-date display, and above the display, an applied BWC badge—which represents the State of Mysore, India, as well as suggestive of a watches escapement (which I still cannot see, but that’s what I was told.) The left side of the dial features the IAF fin-flash (the Indian flag colors as they appeared on the MiG’s vertical stabilizer) and the model name. The dial offers excellent legibility in day and night, and the addition of the fin-flash and the badge add a bit of restrained flair that deepen the Indian roots of the watch and tie it more tightly to the MiG. 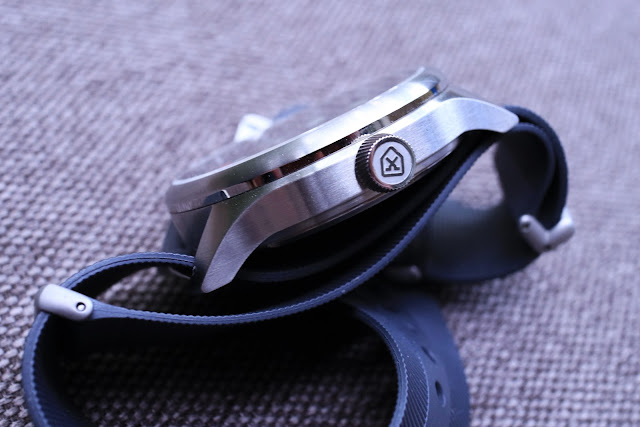 ​
The 42mm case offers equal balance and restraint. A rounded brushed bezel surrounds the sapphire crystal to good effect. Between the bezel and the midcase is a thin polished ring, offering the only break in brushed finishing throughout the watch. I love the simplicity and grace of the 22mm lugs. They are the perfect length, and the tops slope down towards the side as they come to an end. Coming around to the 3 o’clock side, the crown is a real standout. It’s exceptionally easy to use, but more importantly, an excellent design meant to represent the MiG’s afterburner. Very cool, I say. For a more direct “HEY! LOOK! AIRPLANES!” effect, just flip the watch over to see three MiG’s flying in V formation on the screwdown caseback, surrounded by historical information. Interested in the mundane details of the watch itself that you’re so used to seeing on other, lesser casebacks? It’s there, on the slopes between the notches. It includes such hits as “100M” (water resistance) and “316L” (steel; though the watch is also available in black PVD). And don’t forget the “SW220-1” (movement). 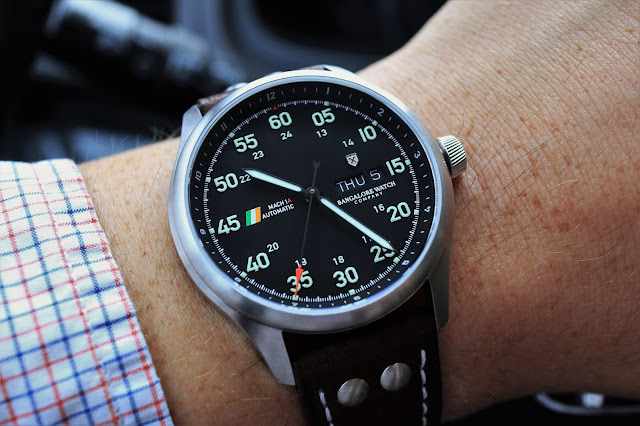 ​
Tick tock goes that Sellita SW220-1. I usually don’t write much about movements, and while that will remain true here, day-date movements are slightly less common so here you go: it’s Sellita’s version of the ETA 2836-2, has 26 jewels, and will keep going for 38 hours. And you can’t see it because there is not a display back. Because the good people of India aren’t a bunch of Peeping Toms like the rest of us. Thank god. 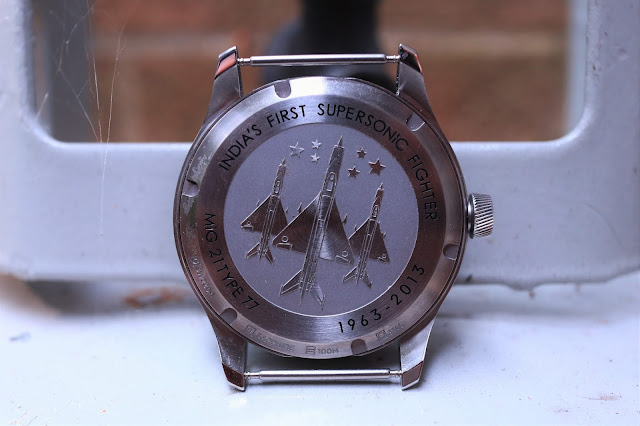 ​
The Mach 1 comes standard with a leather-lined textile strap (think cordura) that is easy to wear and looks great with the watch. No break-in issues here, though I wasn’t the first reviewer. The watch was easily paired with a variety of other straps, as some of the photos show. I really liked how it looked on my red Barton Elite Silicone and my G&Co. brown leather racing strap. That is to say, while the dial has some small flashes of color, it’s nothing that will disallow a good amount of strap pairings. 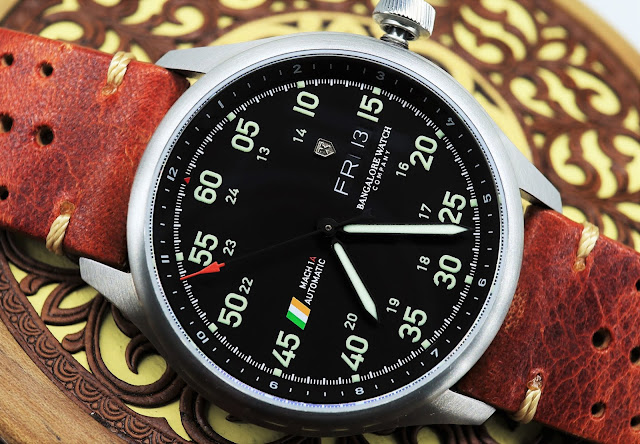 ​
The Mach 1 succeeds where many other pilot watches (and watches in general) fail. It says it is paying homage to something and actually does so. Explicitly with its engraved caseback, but more subtly—and more powerfully, I’d say—with the afterburner-inspired crown and the fin-flash on the dial. “Made in India” isn’t something that’s often celebrated or even sought after in the US, and maybe the Bangalore Watch Company--India's first microbrand--and their Mach 1 can start to change that. It’s available now for pre-order for $680, which I think is a prefect price for such a great timepiece.

P.S.- In furtherance of the watch's legitimacy, BWC has sourced metal from one of the decommissioned MiGs and recycled it into a limited edition of 21 Mach 1 dials. Pretty awesome until you realize they're already sold out.⬩ 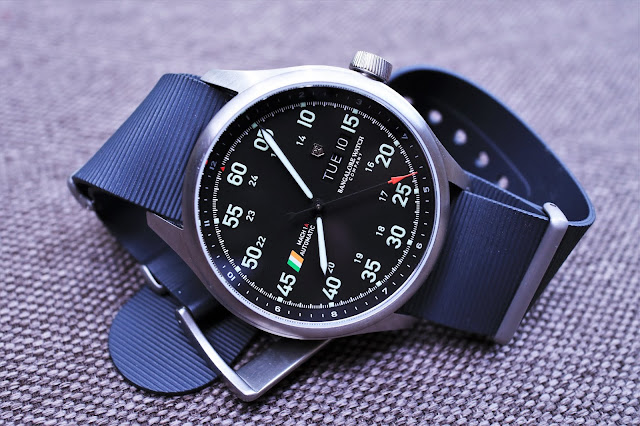 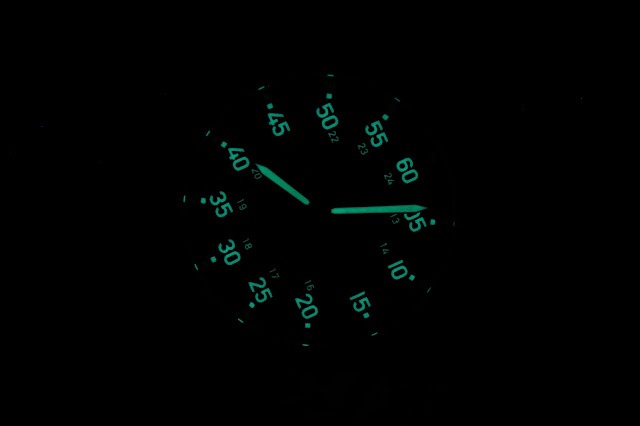 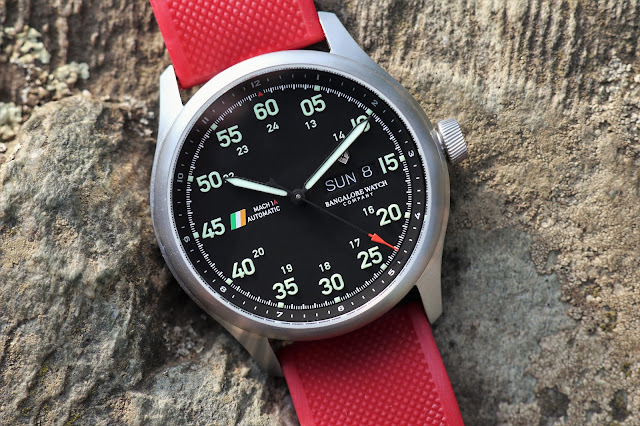