Watchitallabout.com Can A Chinese Tourbillon Be Any Good? – The Waldhoff Metropolis

Feed from watchitallabout.com. Borealis Watch Forum takes no responsibility for any of the content posted.

The tourbillon is one of those complications that I’ve not really given much thought to before. For anyone who doesn’t know what a tourbillon is, it’s a complication that was invented by Breguet in 1795 and patented in 1801. The word itself is the French for “whirlwind”, which describes the fact that the balance wheel rotates a full 360 degrees as the movement ticks. The reason Breguet developed this complication is that he sought to eliminate the positional error that occurs from a pocket watch remaining in one position for extended periods of time.


Whether or not the tourbillon actually has a noticeable impact on movement accuracy in a wristwatch is up for debate, but it’s still used as a way for brands to flex their watchmaking muscle. As a result of this, tourbillons usually cost at least five figures.

However, the watch I’m reviewing today is just $1,499. It’s called the Metropolis and it’s produced by a microbrand called Waldhoff that seems to specialise in bold statement watches like this one. 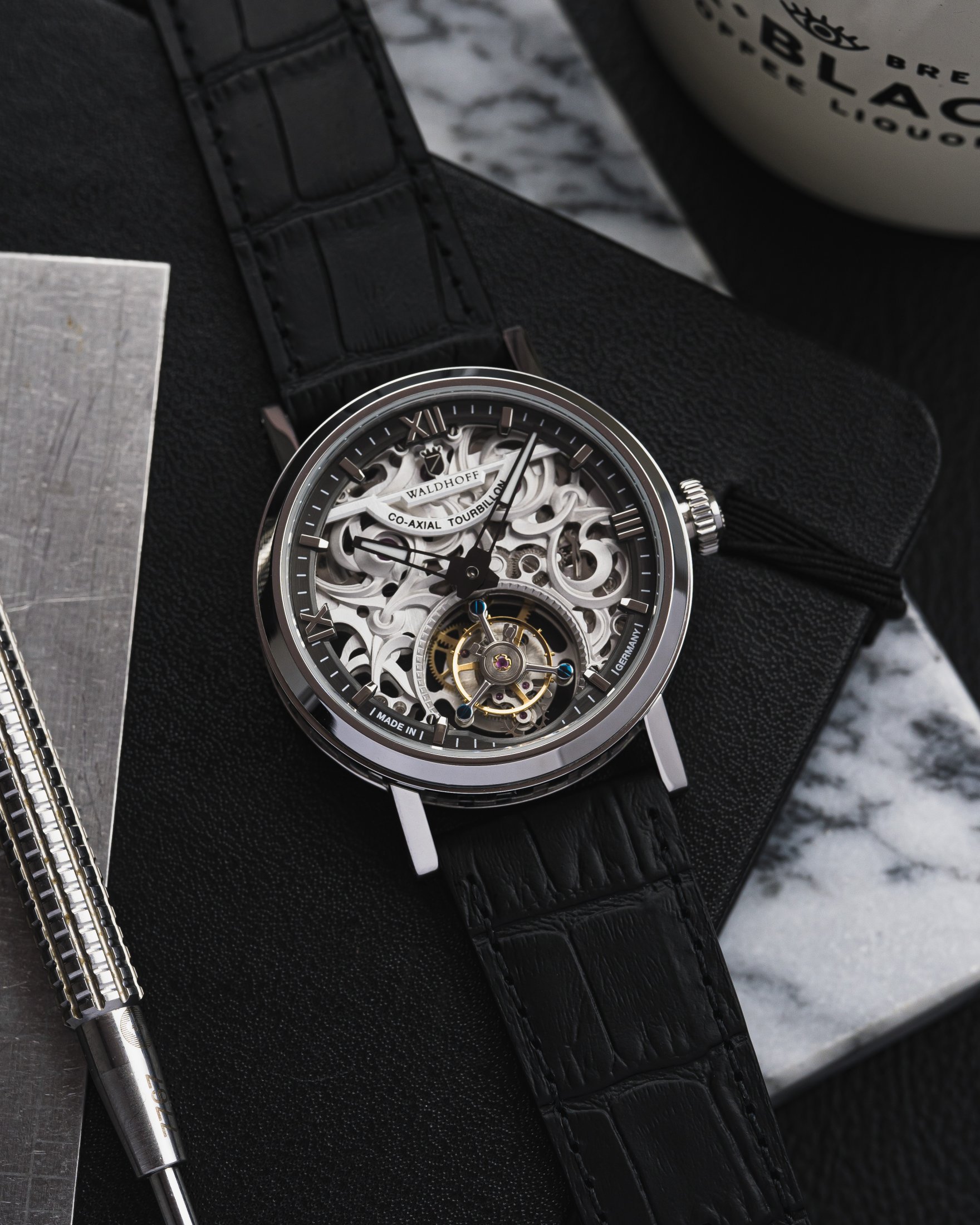 Why This Tourbillon Is So Cheap


If you’re wondering why the Metropolis is so cheap for a tourbillon, it’s because it uses a Chinese movement. Specifically a Hangzhou 3452, which is a manually wound co-axial tourbillon. It features 29 jewels, a 4Hz beat rate, and an impressive 72-hour power reserve thanks to its twin-barrel design. Obviously, this movement isn’t on the same level as the tourbillons made by the luxury Swiss manufacturers, but Hangzhou has been in business since 1972 and is therefore a fairly established manufacturer of affordable mechanical movements. 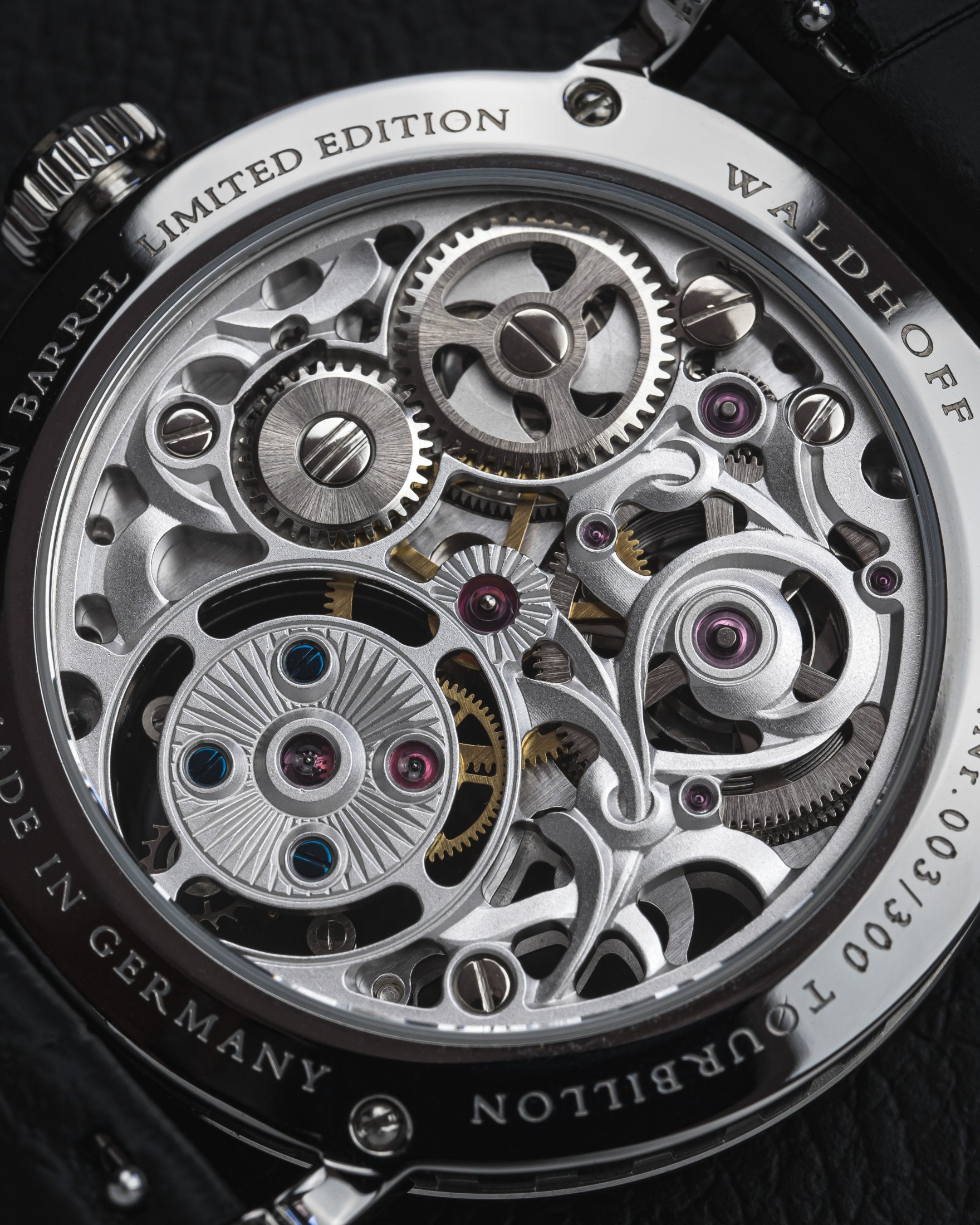 A Look At The Dial


The design of the dial strikes a good balance between legibility and making a statement. Most of the dial is completely open, revealing the decorated platework of the movement. From a distance, it looks rather striking, especially as you can see the tourbillon itself in action. Though I must admit that up close it’s apparent that the decoration is stamped, and you won’t confuse this for a high-end Swiss tourbillon. However, it’s exactly what I’d expect from an affordable Chinese movement, and it still looks pretty impressive at a glance. 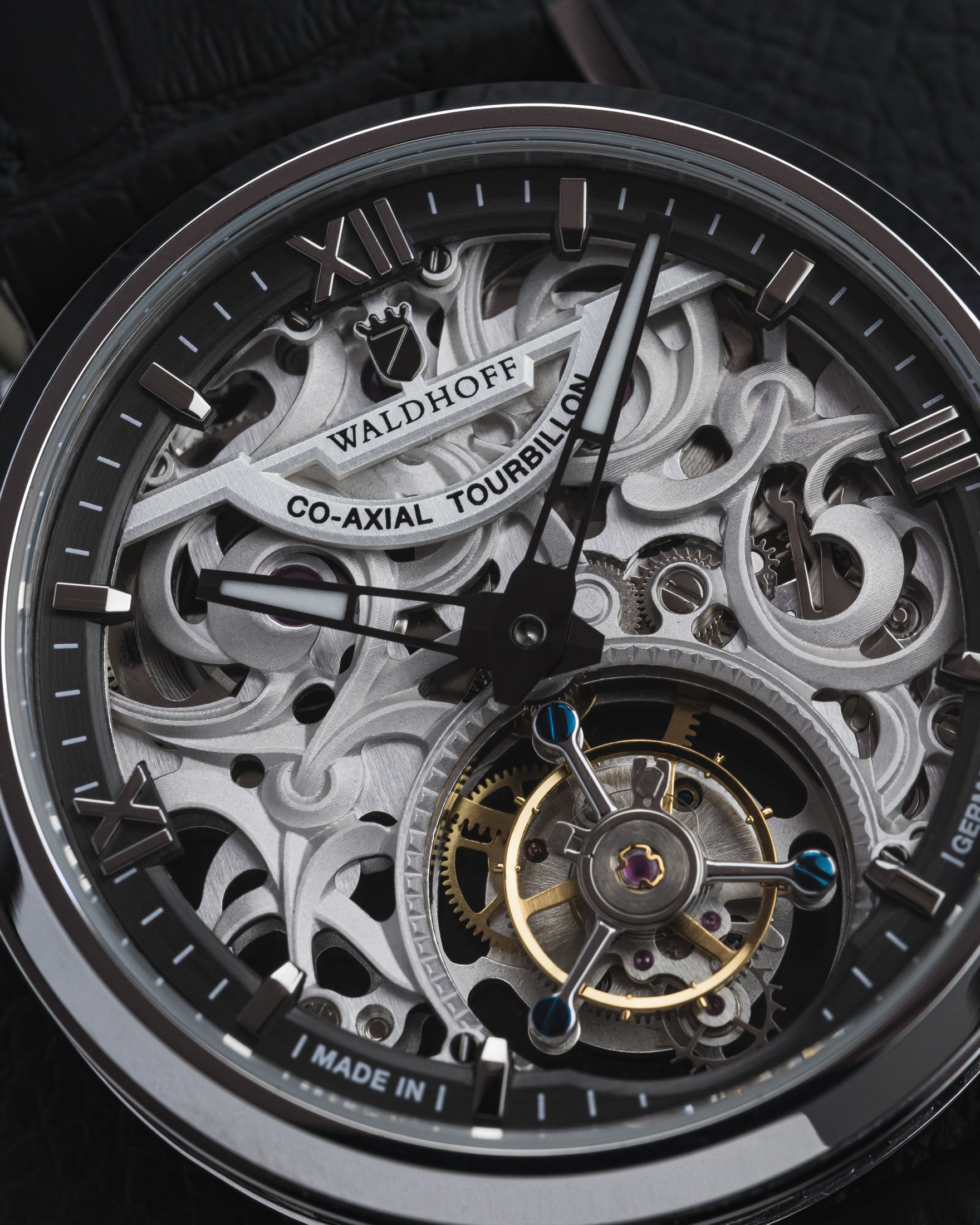 The keen-eyed among you will have noticed that the dial has “Made in Germany” along the bottom. To be honest this seems to be misleading, as I’m confident that the various parts of the Metropolis will all have been manufactured in China.

The hour markers are mounted onto a raised ring with a minute track. The markers themselves are pretty simple, being a mix of batons and roman numerals, but they catch the light rather nicely and help the watch feel more premium. 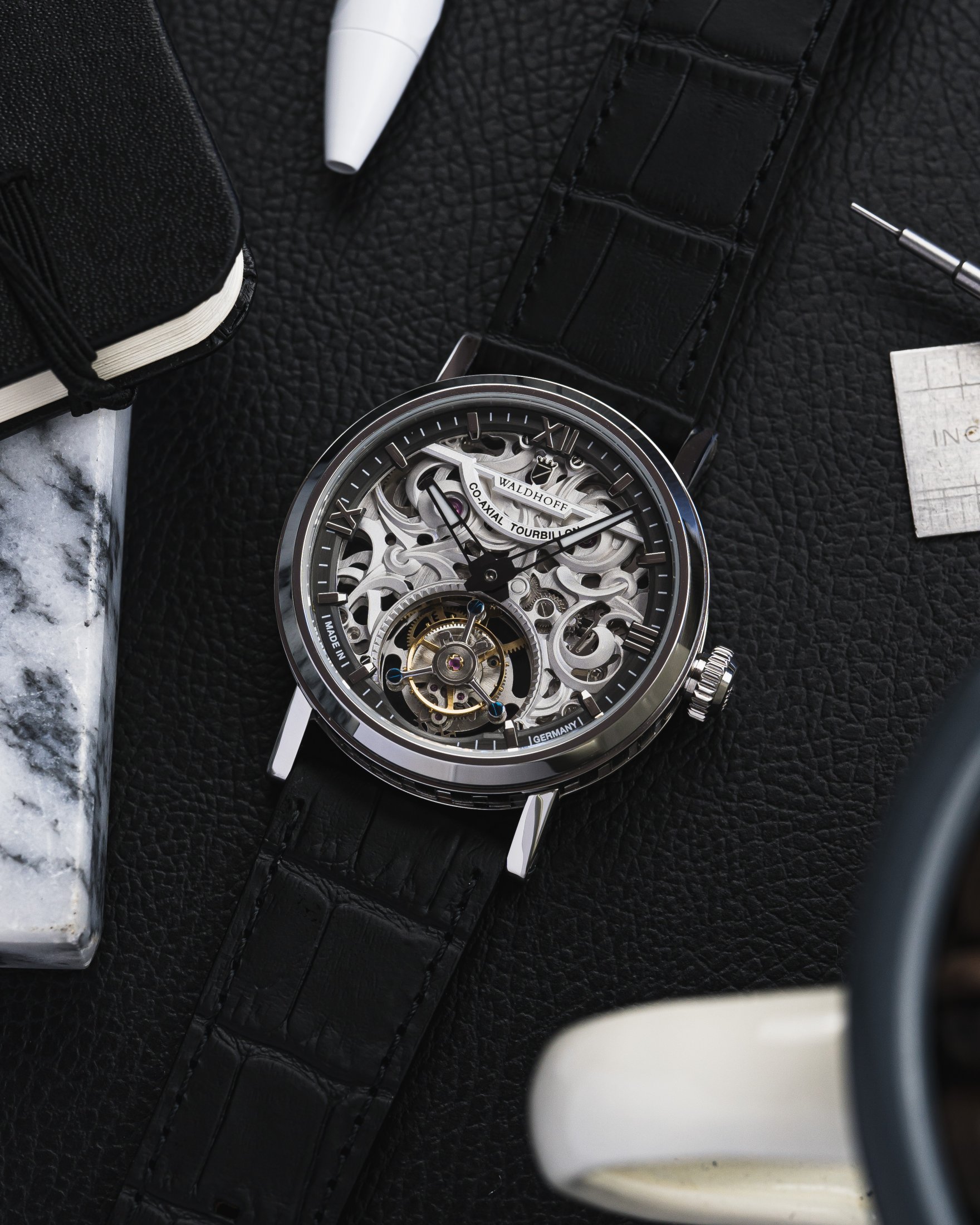 The polished handset looks pretty premium too. They’re rather simple in shape, and semi-skeletonised, with a polished finish and plated a gunmetal grey. This helps them to stand out against the movement’s decoration and means that they too catch the light from certain angles. The hands are also lumed with Super-LumiNova BGW9, and I was pleasantly surprised by just how legible the hands were in the dark. To cap everything off, the dial is protected by a flat sapphire crystal that has an anti-reflective coating. 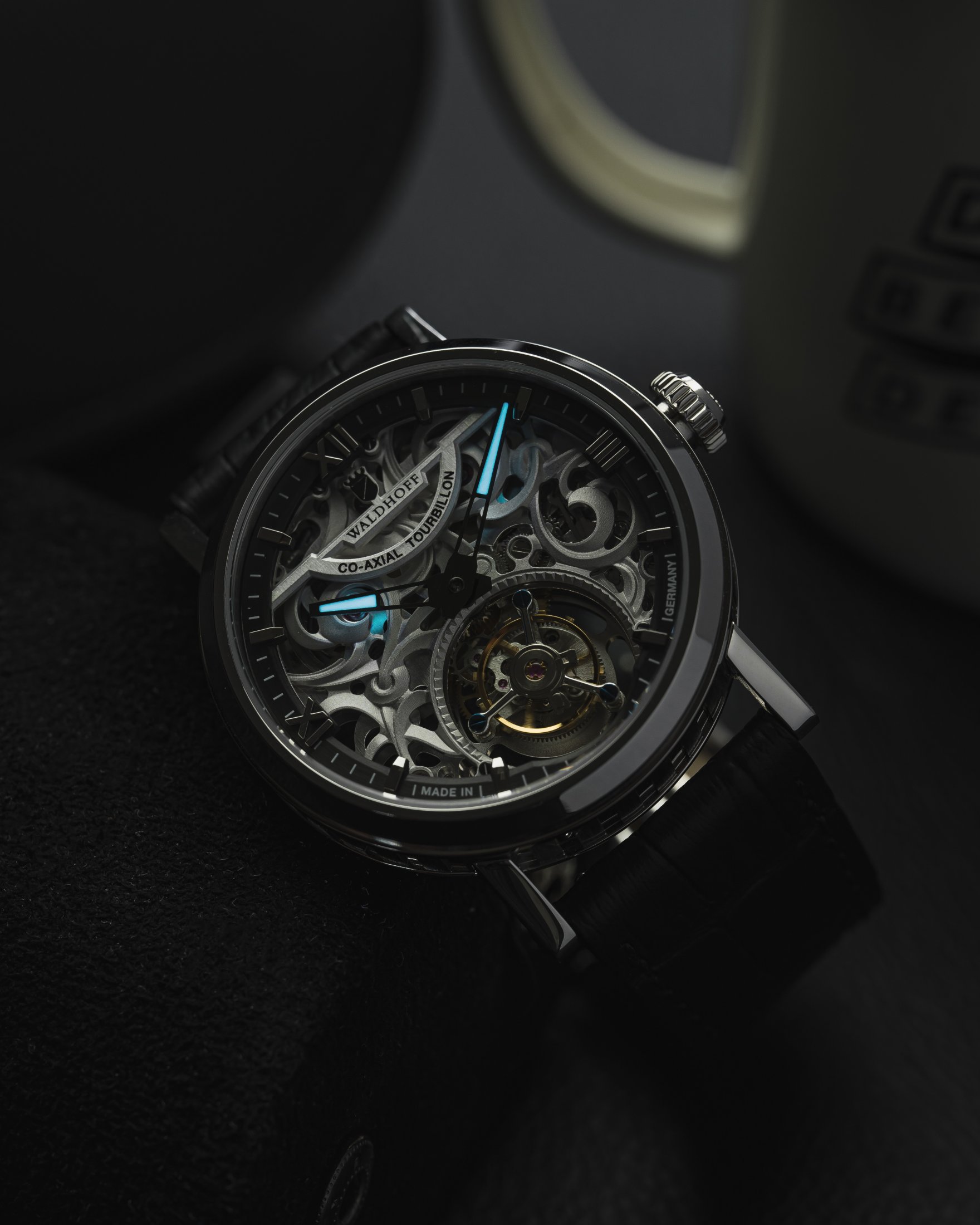 And speaking of crystals, if you flip the watch over you’ll see that it has a display case back, which shows that the movement has the same style of decoration on the back as on the front. Again, the effect it produces is rather attractive, and it’s another nice touch to the design. 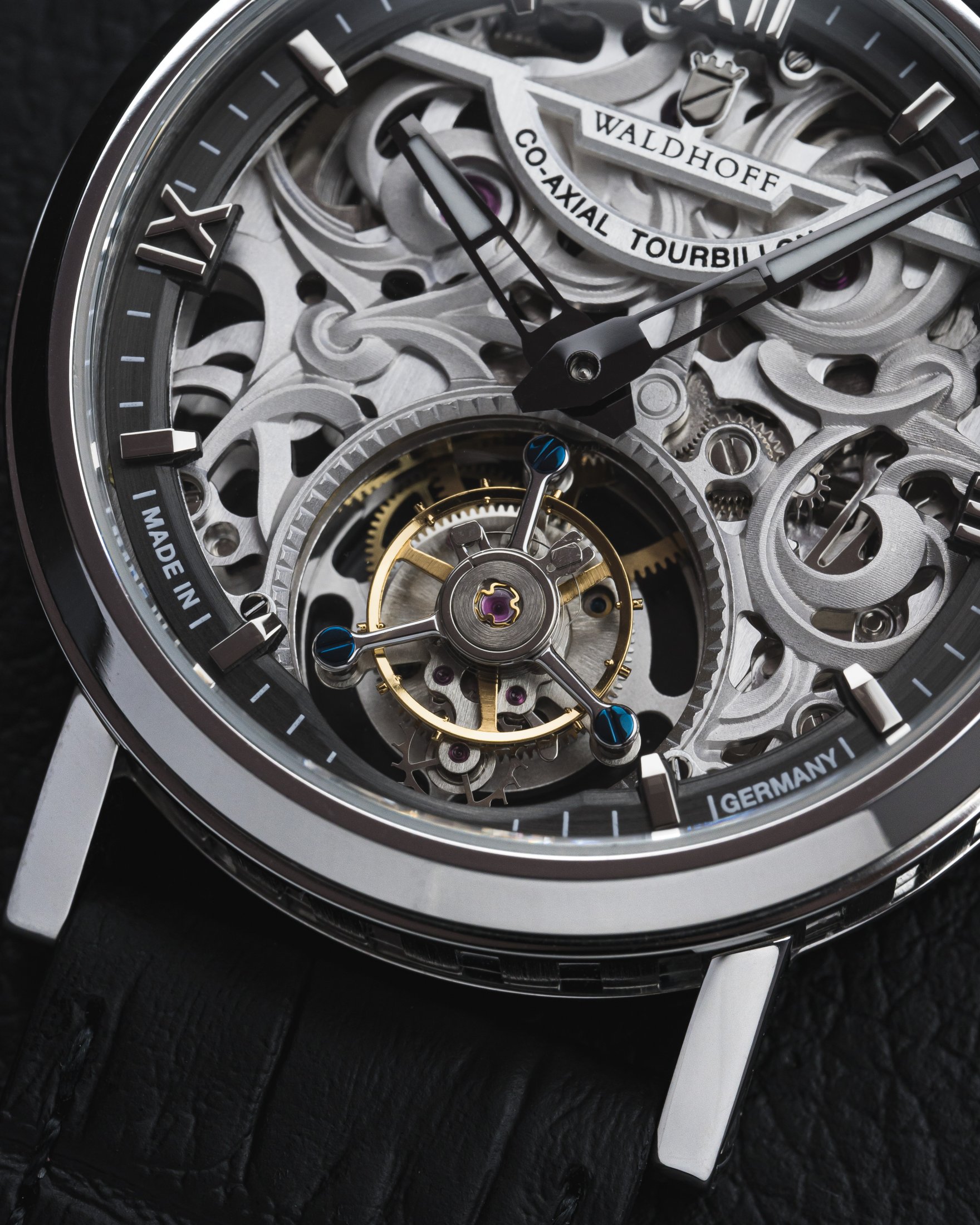 The Strap On The Waldhoff Metropolis


The Metropolis comes on a 22mm leather strap that’s got a faux-alligator finish. It’s nothing fancy but it feels sturdy and is nice and thick to support the weight of the watch. It also has quick-release spring bars, so it’s really easy to change it for something more premium if you really want to. The strap also uses a deployant clasp, which does give the Metropolis a slightly more premium feel.

The Case And Wearability


The steel case wears quite well on the wrist thanks to its reasonable dimensions. It measures 41mm in diameter, with a 48mm lug-to-lug and a thickness of 11.5mm. However, it still has a strong presence on the wrist, thanks to its thin bezel, which makes the case wear larger. 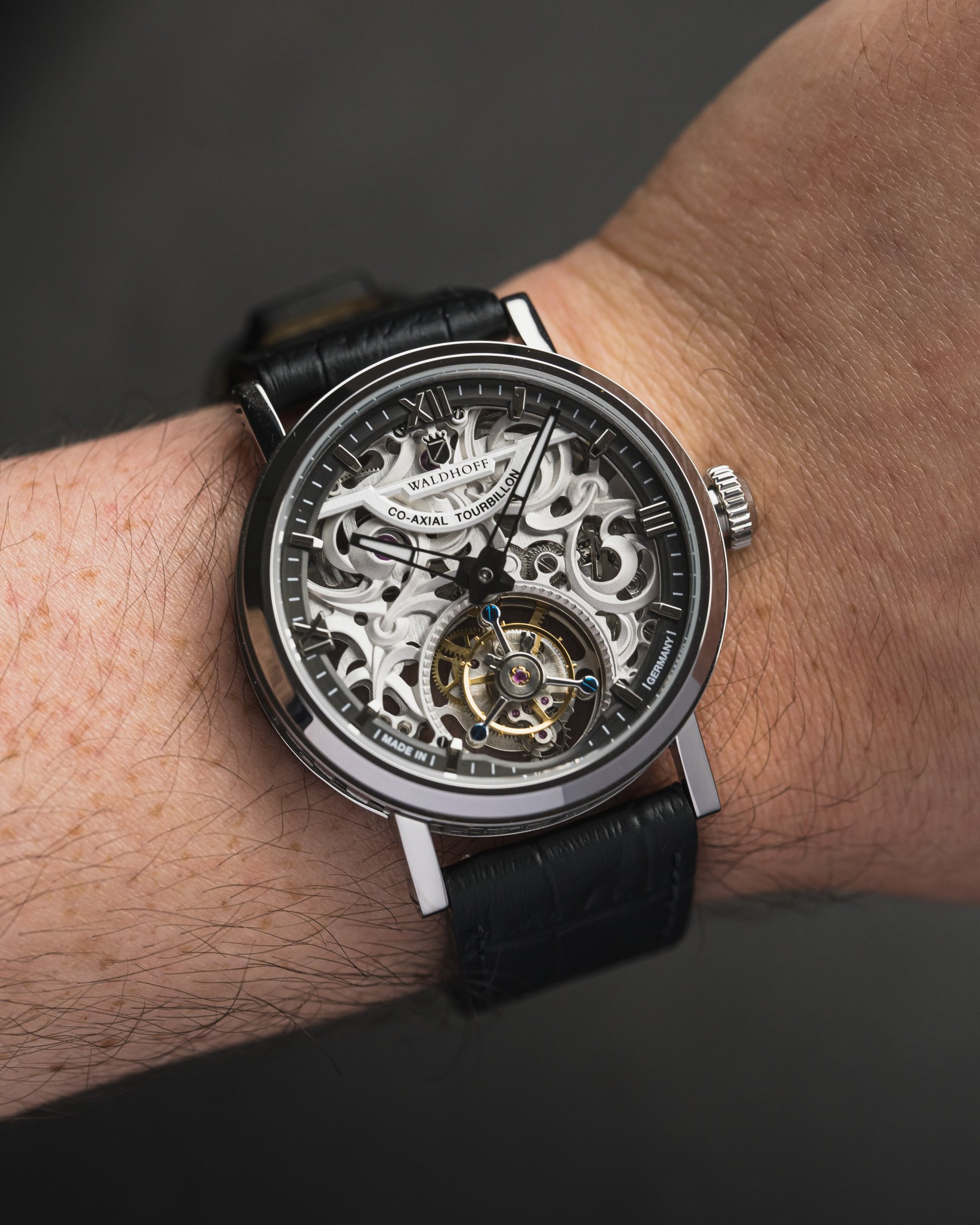 From the top, the case looks to be exceptionally simple and straightforward, which is exactly what you want when the dial of the watch is as busy as the one on the Metropolis. However, Waldhoff has actually fluted the edge of the case, with polished slots milled into a brushed surface. It’s an interesting concept, but one that unfortunately I don’t think works brilliantly. The case finishing isn’t great overall, but it’s especially poor on this section of the watch, with the CNC marks still visible through the polishing, and the brushing being rather irregular. It’s a real shame because it really brings the quality of the watch down. 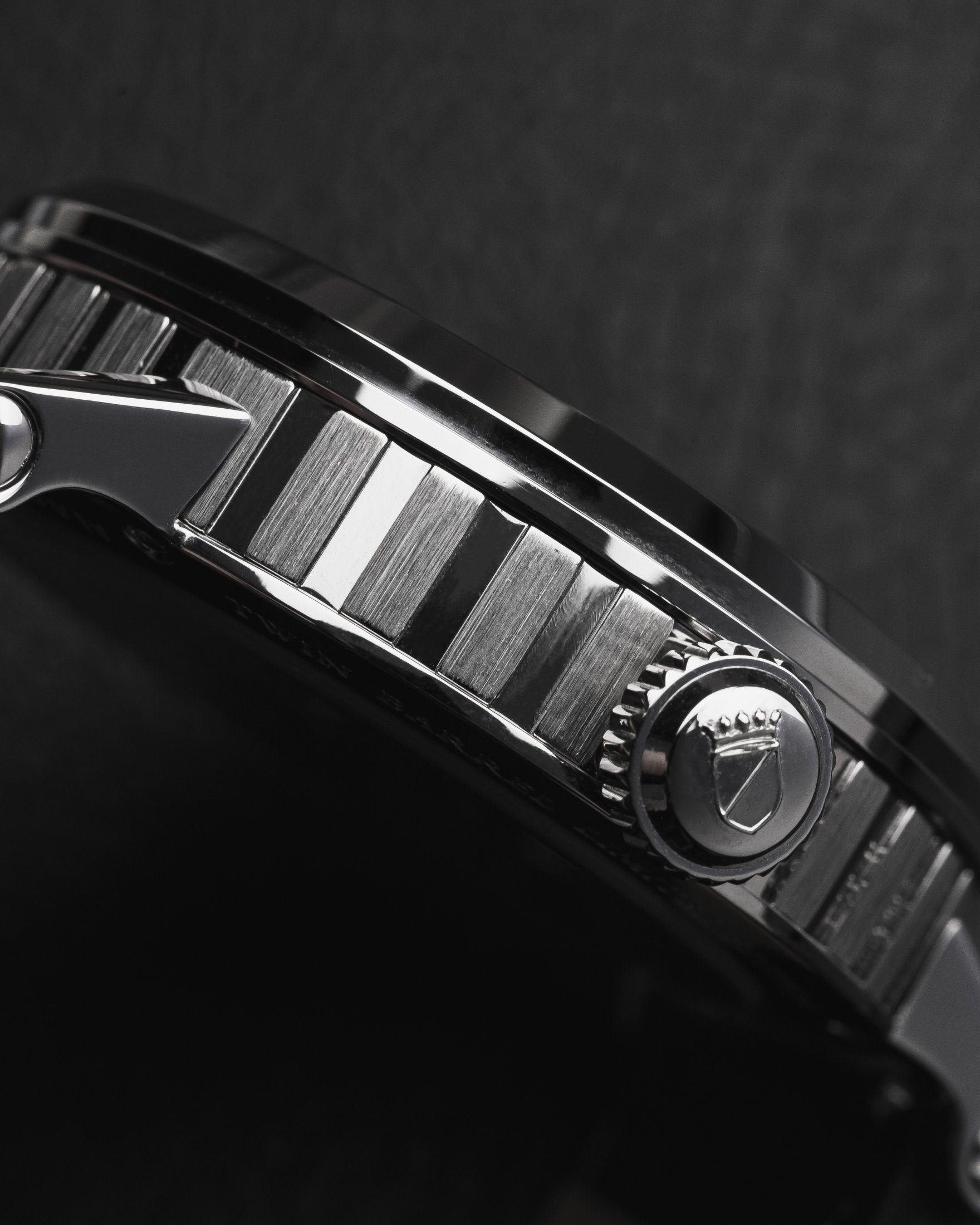 
Now, to finish off, I’d like to take some time to talk about the price of the Waldhoff Metropolis, because $1,499 can buy you a whole lot of watch from plenty of well-known brands. Which makes the Metropolis quite a tough sell.

In Waldhoff’s defence, the Metropolis is priced pretty comparably with other similar affordable tourbillons with Chinese movements, and I do see the appeal of the watch. It’s different, and rather striking to look at with the skeletonised movement and the tourbillon ticking away. It’s just that at the end of the day, I think that most of us (and I do include myself in this) would rather spend $1500 on a watch from a more established brand than on one from a Chinese microbrand of this quality.

Because the fact is that this watch is essentially a bit of affordable fun that offers something different to your usual microbrand watches, but with too high a price tag to actually be called affordable. And, unfortunately, I think that there are only a small number of people who would choose to spend the money on this given what else you can get.

You can read more about the Waldhoff Metropolis from Waldhoff’s website here.


This is a sponsored article that was paid for by the brand. The 12&60 author has fact checked and authorised its relevance for our readers. Sponsored articles like these help us maintain the site and provide consistent top quality content.


The post Can A Chinese Tourbillon Be Any Good? – The Waldhoff Metropolis appeared first on 12&60.