Most modern divers are derivative in one way or another. Usually they are heavily inspired by the Rolex Submariner, if not entirely ripping off that iconic design. So when a watch comes along that isn’t that, I pay attention. And when that watch is so not that as to be just entirely different, I become quite interested. That’s the case with the Isotope Goutte d’Eau diver, the brand's second offering after their debut jumping hour Rider model. The design language of fluidity and a general avoidance or harsh angles is continued in the Goutte d’Eau to great effect. 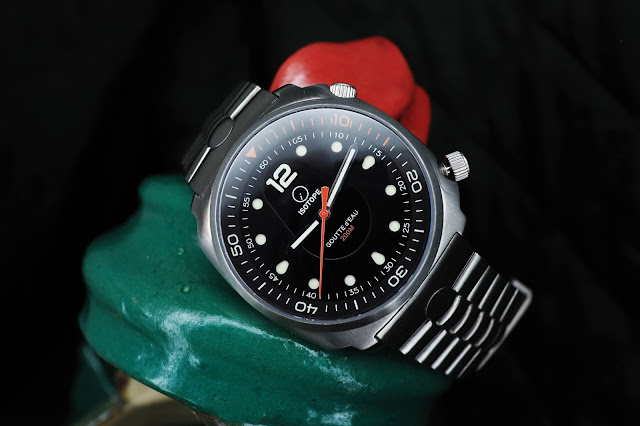 ​
By way of history, Isotope was started 2015 in England by José Miranda, following two other less successful forays into watchmaking. The brand was born of desperation and a bit of necessity. Mr. Miranda longed for a Genta Jumping Hour but felt that he needed both kidneys, so couldn’t afford one. His solution? Build his own. The result was the Rider, a jumping hour with a bespoke movement module created just for the brand. The watch is a study in inspired design: it is clearly reminiscent of Genta’s design language and simultaneously infused with newness, freshness. The Goutte d’Eau is no different, as even a cursory glance elicits a genuine “Well now, what’s this?” Working with the designer behind the Konstantin Chaykin Lunokhod, Isotope sought to bring something new, original, and distinct from the competition. And with a watch that is fully bespoke save for the movement, I dare say they’ve succeeded. 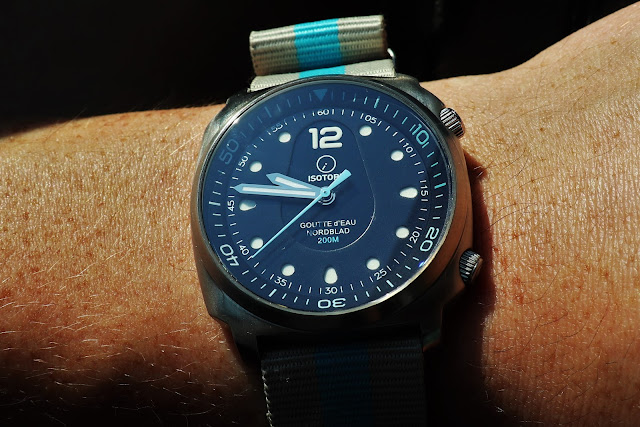 ​
I was fortunate enough to be able to test out both iterations of the watch: the standard Orange and the Nordblad Limited Edition. The latter is a partnership with Johann Nordblad, a Finnish champion ice freediver. I checked and ice freediving is definitely a thing. If you’re familiar with freediving, just add a top layer of 4- to 6-inch ice and make the water much, much colder. That’s ice freediving. It’s not something I’d ever do, but it’s something that Johanna Nordblad does very well, and Isotope seized the opportunity to partner with her for their special edition. The notable differences are in the coloring and casebacks, but we’ll get to that in a bit. 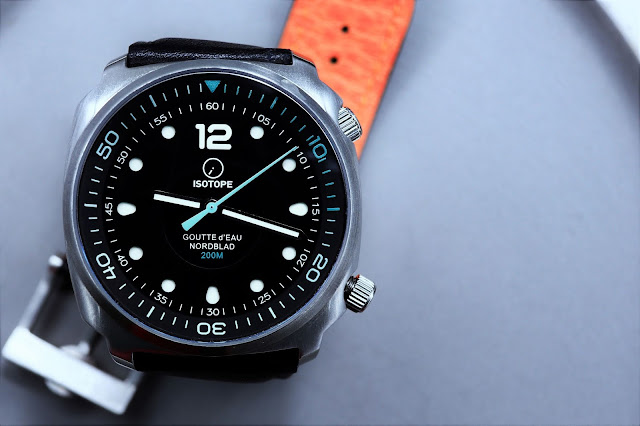 ​
The Goutte d’Eau (French for “water drop” and pronounced “goo’dough”) features a distinct 40mm case that I’ve not experienced before. While its certainly in the cushion case family, the design style is intentionally referential of the Streamline Moderne aesthetic (think of those beautiful, sleek vintage trains). It features a brushed finish in its entirety. Normally this might play a little on the blah side but given all the curves and the depth of the dial, it works here. The 22mm lugs start as a very slight slope down from the main case, but then plummet down, making for stubby little buggers. The effect is a 40mm case that’s only 44mm lug-to-lug, 13.3mm thick, and sits quite nicely on my 7-inch wrist, but I imagine could do well on nearly any wrist. Such is the beauty of proportion and balance: it just works. On the righthand side of the case are two crowns: the upper features a colored water drop matched to the dial color (orange or ice blue) and manipulates the internal dive bezel; the lower adjusts the time. While to lower crown is screwdown, the upper is not, but is instead equipped with 4 gaskets to ensure water resistance to 200m. The crowns were one of the few issues I had with the watch, though. They were simply to small, making setting the watch and rotating the bezel an unfortunate chore. The happy ending there is that the production models will have larger crowns that will allow for easy manipulation—win. 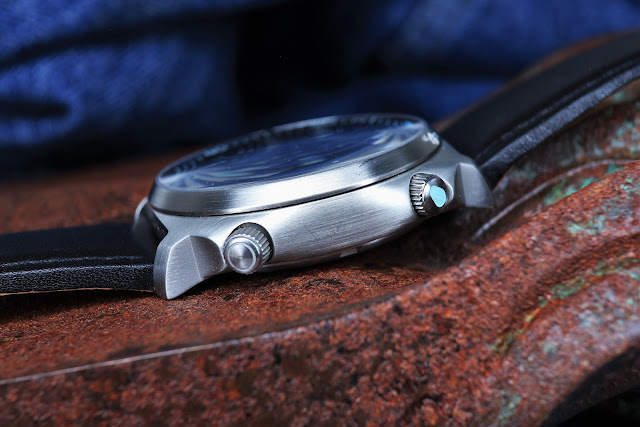 Flipping the watch over, we find a screwdown caseback. In the case of the Nordblad model, the caseback is etched with an artistic interpretation of Nordblad freediving (though given the orientation, perhaps she’s rocketing out of the water), to the right of which is text with her name and title of “Ice Freediving World Recordist.” You’re probably wondering if World Recordist is an actual thing. A Google Search—you’re welcome—suggests that it is not. Though I’m happy to entertain it here, it sounds more like her entire profession is just accumulating world records, like some sad Guinness Book addict. And given the video I’ve seen of her dive, there’s much more to it than that. Anyway! On the Orange version of the watch, a sapphire caseback provides a view of the automatic movement with a custom Isotope rotor. As you may have guessed, I spent about 3 hours watching the balance wheel go. Thank goodness for see-thru casebacks. 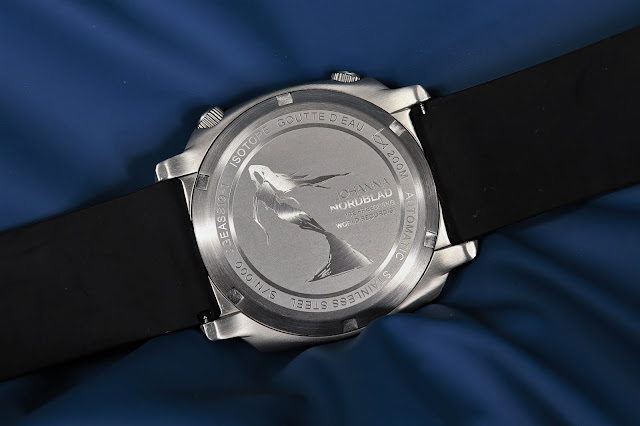 ​
Coming back to the front—unless you want to watch the movement for a bit longer?—an anti-reflective sapphire crystal gives way to a killer dial. Just to get it out of the way: the Nordblad version has ice blue, the orange version has…orange. Coming in from the outside, we first have the inner dive bezel, which will be fully lumed for production. One nitpick of mine is the use of a standard triangle for the 60 marker on the bezel; I think this was a missed opportunity to incorporate another waterdrop style marker and create even more consistency in design. For those of you who would argue that this may lead to it being confused with the dial markers on the main dial, keep in mind that the bezel and hands are C3 lume while the dial markers are BGW9. Which is to say you’d be wrong. 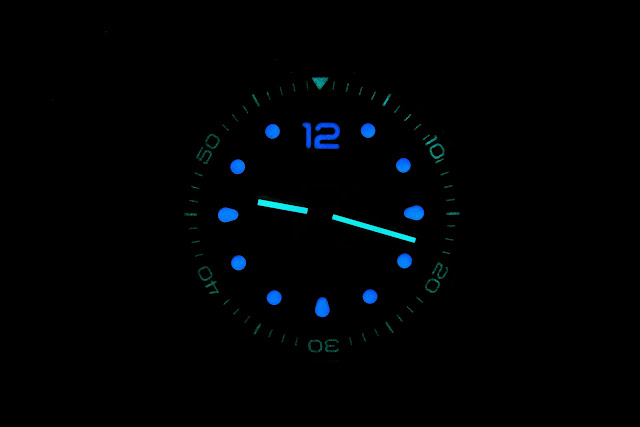 ​
Along with the contrasting lume, I love the sandwiched center dial that uses the water drop for the markers and the rounded ‘12’. The sandwiching adds another layer of depth that is furthered by the recessed water drop motif that begins just above the ‘12’ and descends to midway between center and the 6 o’clock marker. This sunken droplet contains the logo—a circle with a bar radiating to the 7 o’clock, position, a lucky number across cultures—above the hands and standard dial text below (in the case of the Nordblad edition, it is so indicated between “Goutte d’Eau” and “200m”). This water drop is the culmination of the watches design: fluid, dramatic, smooth, and aesthetic pleasing. I will mention the hands as a matter of necessity, but they are my least favorite part of the watch. They are admittedly not offensive, but I feel they could have been better in two respects. First, they are sharp, pointy things that do not mesh with the rest of the watch’s design. An improvement may have been something in the vein of the Shinola Sea Monster’s handset (GASP!), or perhaps like the upcoming Badger Islander. Second, despite an absence of any polishing elsewhere, the hands feature a polished finish. Given how unique the rest of the watch is, how it was built from the ground up, I was surprised to see such a misstep. Handslappery aside, the dial pleases at every other turn, and continues the originality of the case. 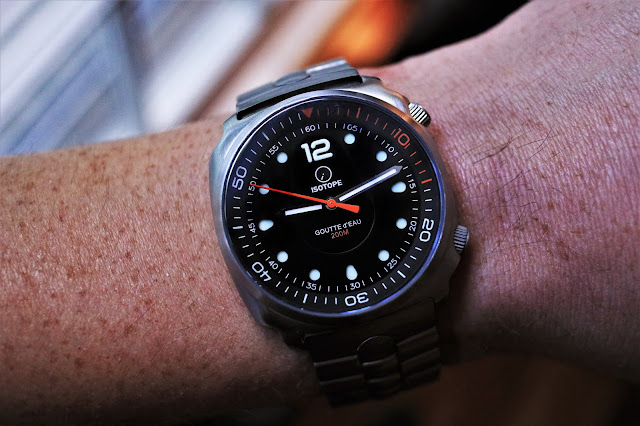 ​
The driving mechanism behind the dial will be one of two options. At the time of purchase, you’ll be able to choose from a Japanese Seiko NH35A or a Swiss Sellita SW200-1. They’re both automatic workhorse movements and you honestly can’t go wrong with either. The NH35 gets you slightly longer power reserve (41 hours vs. 38 hours), but you lose a bit of accuracy (-20/+40s vs -12/+12s). The watch will further be offered with a date or no-date dial, meaning with a useless crown position or with a useful one. Looking at the renders of the date option, tradeoff seems to be a bit of imbalance: the date window has been snuck into the 4 o’clock marker, making it larger than it’s cross-dial friend at 8 o’clock. This comes down to taste and what you find more abhorrent, a phantom date position on your crown, or a 4 o’clock date window that creates dial imbalance. These are the decisions that separate the leaders from the followers, so choose wisely. 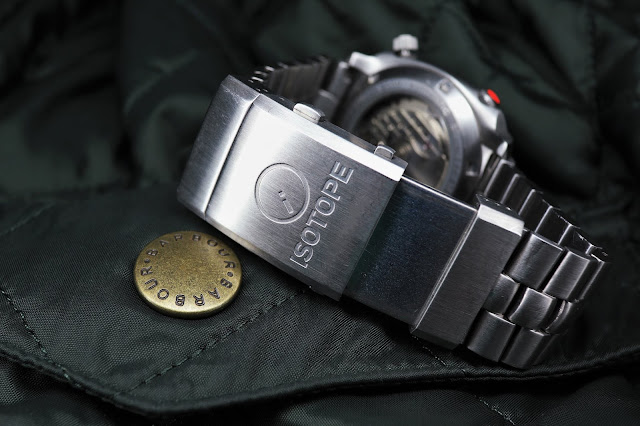 ​
Let’s talk straps. At this point you’ve already googled “Streamline Moderne,” which is helpful as I’m about to use it again. The metal bracelet that comes with the Goutte d’Eau is what I imagine a Streamline Modern version of the Seiko Fishbone bracelet would look like. And that’s a great thing. It features a slightly chunky ratcheting clasp for quick microadjustments—or to fit over your thick neoprene wetsuit. It’s sturdy and wore well, though the end links protruded beyond the ends of the lugs. This is due to the exceptional stubbiness of said lugs, which also makes freestyle strap swapping (not as hard as ice freediving) challenging. The short lugs mean that there’s very limited room for extra material and a springbar, so only the thinnest of straps will be compatible. 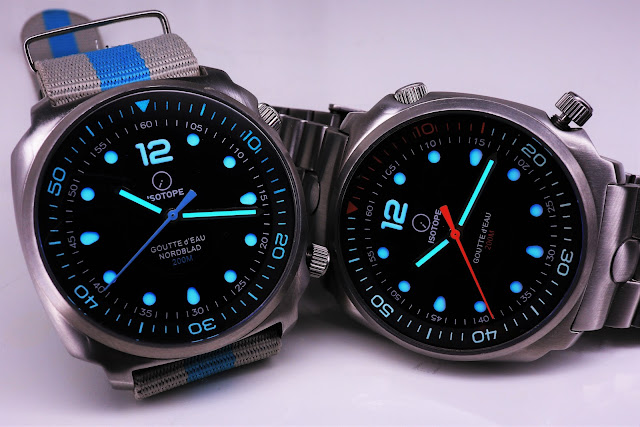 ​
The Goutte d’Eau has hints of other watches here and there, but it comes together to form something original. And that’s something to get excited about whether or you not you actually like the watch. I do, so I’d say if you do to, it’s worth the investment. Speaking of which: for the NH35 version, you’re looking at just under $290 until October 6, then about $305 until preorders run out—final retail will land at $380ish (depending on the markets). If you want to spring for the Swiss SW200 movement, it’ll be $385, $410, and $513, respectively. Let’s focus on those final numbers for just a bit. For a completely original watch designed from the ground up—the only stock part is the movement—you barely have to step beyond the $500 mark. And that’s for the Swiss movement. The only drawbacks you need to consider: stubby lugs that should just a bit longer, phantom crown position/dial imbalance with the date display, and polished hands that should be brushed. None of those alone are dealbreakers, nor are they together, for that matter. The Goutte d’Eau isn’t much like any other watch I’ve seen, and while it’s not new to try something new, it is refreshing to see something new done well. So even if you don’t think it deserves your money, it certainly deserves your plaudits.
\
You can get your very own, right now, over at the Isotope website.⬩