Heads up! The Marnaut Dark Surge is a big watch. Not Invicta big, but bigger than I usually strap on. The brand is the brainchild of Mario Jutronic, a Croatian watch lover who founded the company in 2018. Mario is a true watch enthusiast, with a vast collection of classics that most of us would love to own. As proof: his parents bought him a Seiko when he was 12, he wore a Seiko 6309-7040 Turtle when he got married, a Seiko 6217-7000 grey dial Olympics GMT when his daughter was born, and an Omega Seamaster 300 cal. 552 during a motorcycle trip across the U.S.A. He also spent his childhood diving off the coast of Croatia. As one does. 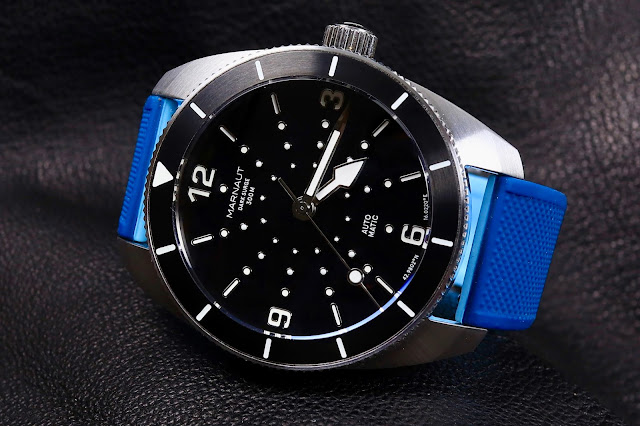 ​
With the upcoming release (and successful Kickstarter) of the brand’s second watch, the Seascape 200, I was eager to finally take a look at the debut model, the Dark Surge 300. The brand’s slogan is “For the explorer,” and Mario said his goal was to not put out yet another derivative homage. I think the Dark Surge delivers on both fronts. 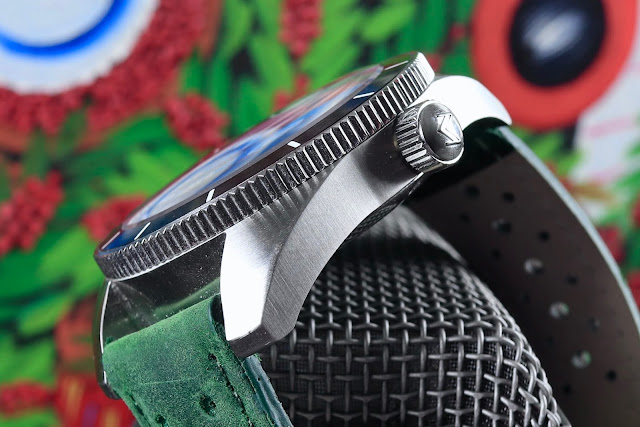 ​
The Dark Surge leaves little room for nonsense when it comes to the case. The watch appears much larger than its 42mm diameter and 13mm thickness, but that’s down to curves. And ironically, just as the curves make it look larger than it is, they allow it to wear better than you’d expect--I actually fit it under some of my shirt cuffs. The fully brushed case (circular on top, vertical on the sides) features a rather long lug to lug, but with precipitous lugs that drop off to hug the wrist nicely. The 20mm lugs feature a very subtle bevel midway down, giving a faceted effect. At 3 o’clock, an ample screwdown crown with a polished head allows for 300 meters of pure, unadulterated water resistance. Due to the movement’s unutilized date function, the crown features a dead position. I’m normally one to rail against this—there are movements available that avoid this issue. But I have to admit, I never really noticed it enough to be bothered by it. 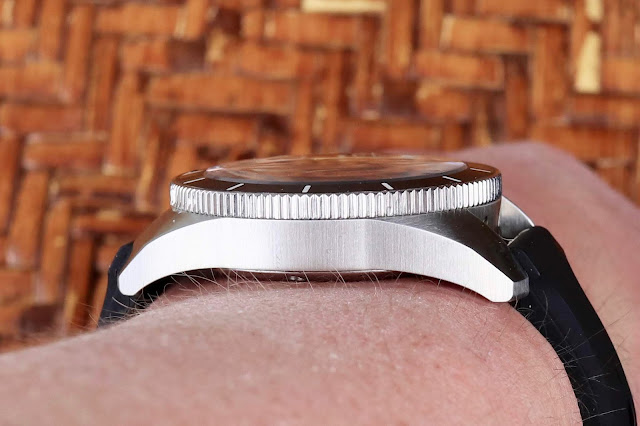 ​
One advantage of the somewhat thick caseback is that allows for full operation of the crown while wearing the watch, something most watches just can’t accommodate. Also exceptionally functional is the 120 -lick matte black bezel (also available in steel). Its coin edge is easy to grip, rotating with a satisfying click and excellent tension for a positive timing experience (a phrase I realize sounds absurd and quite snooty). Fully lumed markers all the way around the bezel allow for midnight timing during your weekly possum hunt. 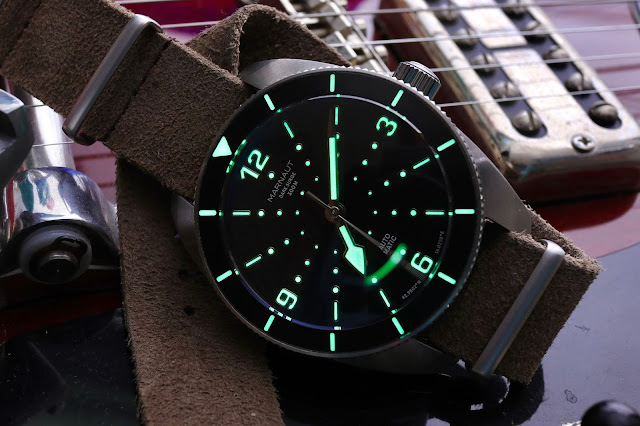 ​
The star of the Dark Surge is unquestionably the dial. Have you ever dreamed a dream such as this dial? Have you ever wondered such a wonder? Drawing it’s primary inspiration from the exoskeletons of the sea urchins that inhabit to the waters off Croatia’s coast, with a dash of the vintage Seiko J12082 Silver Wave Starburst edition, the matte black dial features 46 Super-LumiNova C3 lume plots with silver surrounds. Forty. Six. That includes all the hour markers and the smaller dots. With great effect, they charge up quickly, evenly, and brightly, and keep shining well past your bedtime. This is not just lume done right, it’s lume done awesome. Cardinal hours feature proper numerals while rounded baton indices stand in for the rest. A lollipop seconds hand along with a sword-style minute and thick spear-shaped hour are all lumed as well. 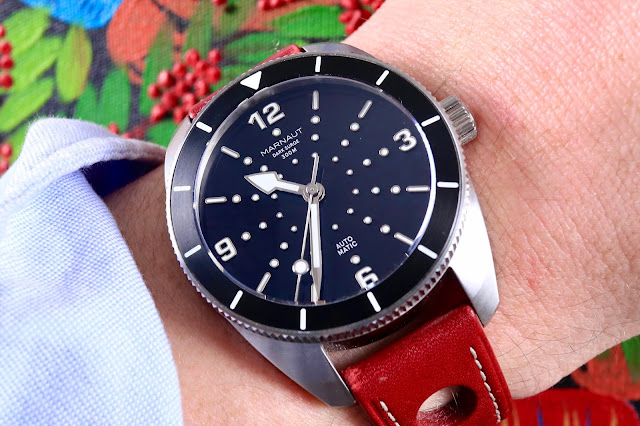 ​
Despite it being my favorite part of the watch, the dial is also where I find a few small nits to pick. Because there is no minute track, setting and timing have to be done either on the 5's or by eye. Aside from adding 48 more tiny lume plots around the periphery, there's not a great wait to do this without changing the way the dial looks and feels. The dial text could also use some adjustment. Just below the ‘12’ you’ve got the brand, model, and water resistance nestled cozily. But then down above the ‘6’ you’ve got “automatic” split into two lines. It’s not terrible but it is odd, and I feel it could have been resolved without too much trouble. Swap the ‘automatic’ for the pip immediate below it, make it one line, and you’re set! I’d also love to see the 12 enlarged, eliminating the pip immediately below it. And the lack of a minute track of any kind makes for a very simple and seductive dial, but also means timing and time setting is done on the 5's or by eyeballing it. But these are somewhat small potatoes; getting a dial like this to work well is a true accomplishment, and the Dark Surge does it with grace and aplomb. 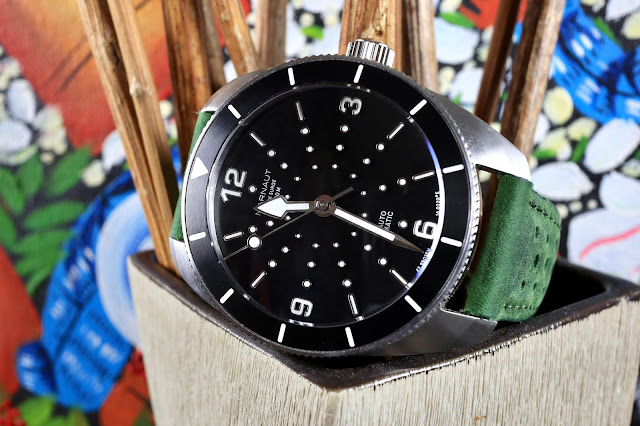 ​
Let’s zoom back out, through the domed sapphire crystal, and roll the watch on over to its backside. You see that not only are the lugs heavily curved, but they feature a concave back to provide for even greater wearing comfort. The screwdown caseback features a polished ring around a brushed circle featuring a novel of information, including a serial number that itself pays homage to Seiko, with the month, year, and production number included within. Then, like Uluru rising out of the Australian Outback, the polished Marnaut logo sits upon a brushed disc. It’s pretty, but its also too pronounced in its definition. Though unnoticeable during normal wear, on a day when I’d had some significant wrist expansion I attempted to shift the watch for comfort and felt the sharpness of the logo scraping against my skin. Not what I want in my caseback reliefs. 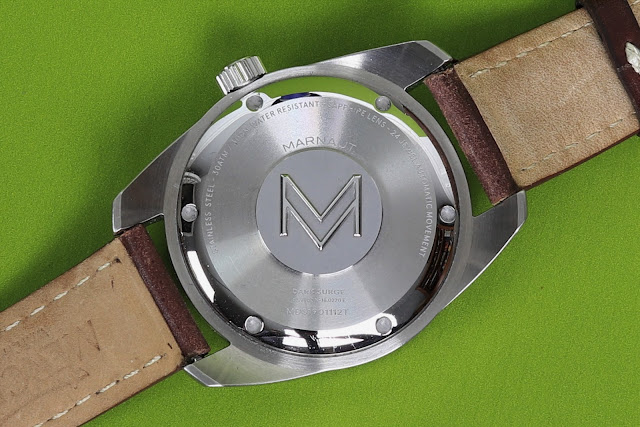 ​
The caseback itself protects a Miyota 9015 automatic movement. It’s a workhorse and though there’s much to complain about in the movement itself, but I would have preferred a 9039 or NH37/38 to allow for a true dateless watch. As I mentioned above, the use of the 9015 means a dead crown position. The movement features 24 jewels, hacking, a 42 hour power reserve, and beats at 28,800 bph. None of that matters though, because it’s very unlikely that you’re buying this watch for it’s movement. But know that if you have to take a day between your deep dives, you can do so without worrying about the Dark Surge winding down on you. 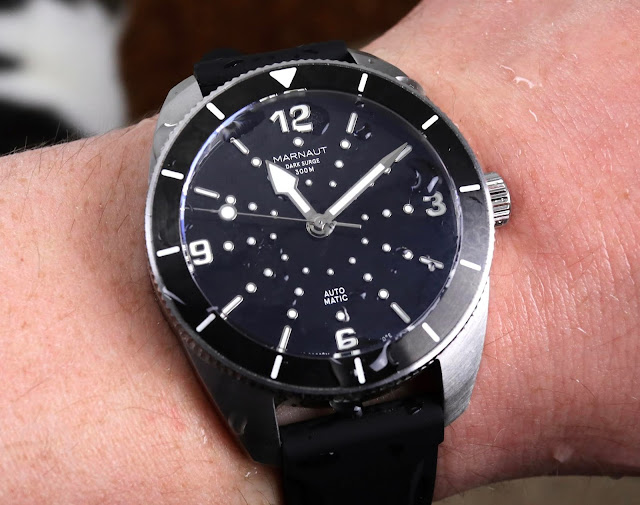 ​
As with any black and white watch, straps are a non-issue. Feel free to put on basically whatever you want. Due to the significant lug curves and concave caseback, NATO straps are no problem and add less height than on other watches. The watch comes standard on a black silicone strap that will receive as few complaints as it does plaudits, which is to say it’s fine. Also included is a grey Italian distressed leather strap, which is of sufficient quality and pairs surprisingly well with the watch. Both included straps will do, but the versatility of the watch allows for a lot more fun than either provide. 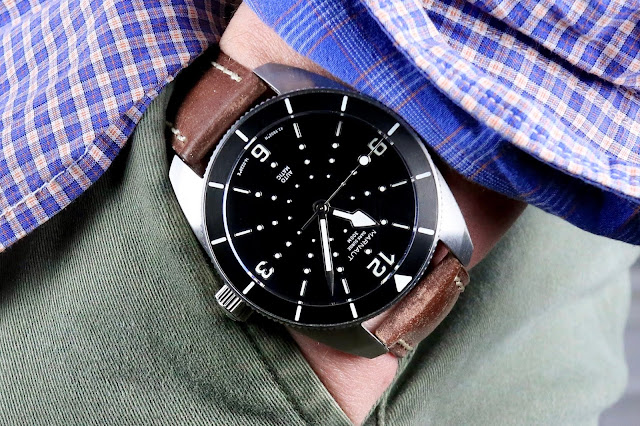 ​
Creating something that is at once familiar and unique is a remarkable feat, and one that through time and patience, Marnaut has achieved. Complemented by a rugged, refined, and functional case, the dial here is a breath of fresh air—entirely original, nearly perfect in its execution, and highly legible. The Marnaut Dark Surge misses with its too-sharp caseback and the two-line ‘Automatic’ (in 50 years, this will be the new “meters first” and Marnaut aficionados will extol its virtues), but it still manages to accomplish its goal: create something new and exciting in the overcrowded space of dive watches. If you’re interested in snagging one for yourself, they’re available here for $549, an exceptional price for an exceptional watch.⬩